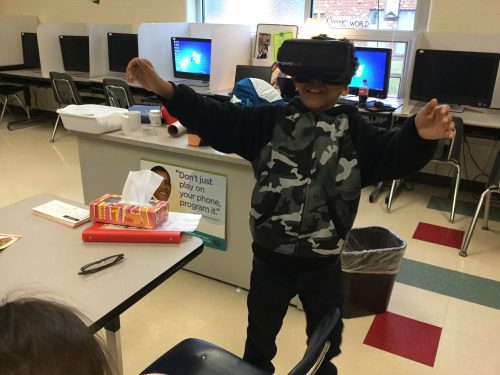 We all know that students remember the things they experience–that’s why we like to take students on field trips when it’s possible.  As teachers we know it is often hard to really communicate ideas about different places that students have never been — they can look at pictures, but it’s just not the same.  Wouldn’t it be great if we could take students to all the places they study?  Talk about an expensive field trip! Or…maybe not!

Over the past few weeks, fourth graders at Oak Grove have been helping me experiment with using Virtual Reality as a way of going on virtual field trips.  As they were studying habitats, they had the chance to actually “visit” habitats around the world using the app Google Expeditions.  I brought in a virtual reality headset that works with a phone and played around with allowing students to go scuba diving in a coral reef, polar bear site seeing in the arctic, safaris in the savanna, and much more.  Since I only have one phone, we also tried out using the app on the iPads without a VR headset, allowing for up to four groups to be participating at a time.

Finally, students then took turns taking each other to different habitats using the teacher console of Google Expeditions and one VR headset.  It was fun to watch them teach each other about what they were seeing in the various places.  I’m excited about the potential of this technology and can’t wait to see how it will transform classrooms in the future.

Virtual Reality from elemitrt on Vimeo.